Love is in the Air! Engagement Stories!

Love is in the air and spring has finally sprung! We asked you to send in your proposal story to be featured in our blog so that we can celebrate you. Thank you so much to everyone who shared a piece of their love story with us, we could not be more excited to share these beautiful stories.

"Justin and I met 10 years ago at my 15th birthday party, freshman year of High School. A good friend of mine asked if he could bring a friend and sure enough in walks Justin; I immediately turned to my friends and said: “I call the tall one”. We spent the whole night not speaking one word to each other as he played basketball with the guys and my brother. Later that night I said goodbye to everyone and minutes later my phone buzzed with a text from Justin.

We talked non stop for one week and the next weekend he came over and asked me to be his girlfriend. (Yes we only knew each other for one week before we started dating and two weeks later he told me he loved me) Shout out to our Mom’s who would take turns dropping us off at each other’s houses as we began our relationship since neither of us could drive yet. We have been together ever since that first day we met at my 15th birthday party!

Each year since we started dating we have gone to California to celebrate our anniversary. We always pick one night of our trip to go to the beach to celebrate. This year was our 10 year anniversary and we had planned to do the same as we always had done every year before. Justin had told me we were still doing our beach tradition but he made us a reservation at a restaurant by the beach so I was to get dressed up for dinner. We showed up at the beach and made our way to a spot where we put down our blanket. Justin told me to stand up so he could take my picture. Oblivious I stood up and smiled, he then asked to go take one at the water. We walked down to the water where I posed again for his picture.

He then took my hand and dropped to his knee. I immediately started shaking and burst into tears. He told me he has loved me for 10 years and wanted to continue to love me for the rest of his life. Immediately after the photographer came over who had been capturing our perfect moment for us (he was pretending to take pictures of other people at the beach so I had no clue). Little did I know my future brother-in-law and Justin’s Uncle were also there filming the whole thing. We then went to the dinner Justin had planned for us. As I walked in I heard a roar of screaming and saw both of our families who had driven from California and Arizona to surprise me! We spent the whole night celebrating what was one of the best days of our lives!

After 10 years of dating, we are so incredibly lucky to continue our love story. We are so excited to spend forever together!

I said yes to the dress at grace style and bridal. We are getting married November 16th 2019."

"My fiancé Joe and I went to Ireland last week, and I was hoping he was going to propose at some point. But the time went by and he didn't.

On our last full day, we met my sister in Dublin. She lives in Scotland, so I rarely see her and it was easy for her to join us! We were walking over to Dublin Castle to "take a tour". We walked under this archway, and Joe told me to stand there so he could take a picture. I walked over and turned around to see him standing behind me. Almost immediately, he got down on his knee! I started getting teary and said "I wondered if you were ever going to ask!" Of course, right away I said yes.

It was easily the happiest and most surreal moment of my life, and my sister being there was the icing on top!"

"Every girls dream proposal was brought to life on December 11, 2018. My fiancé and I got engaged in New York City during a carriage ride in Central Park. It was the most magical day any girl could have ever asked for."

"Hello! My name is Judy Holley. I purchased my wedding dress from you guys back in 2015, and this is my engagement story!!!

In 2015, my husband (my boyfriend at the time), Chance and I were both active duty in the United States Army. And it just so happens, we both got deployed at the same time, but to different countries: I was in Iraq and he was in Niger. We spent the year apart, calling when we could, but staying in contact mostly through email. We had been dating for about 2 years by this point, and we were VERY used to being long distance. Well, during this time we planned a big “welcome back to the United States “ homecoming and decided we wanted to go to Disneyland. We flew my parents and siblings out, and we all were excited to have everyone together. The first morning in Disney everyone was very adamant that we needed to go meet Mickey in his house inside the park. I was not entirely interested in meeting the characters but my family wanted to go so I appeased them. Well we got to the front of the line and my mom pushed me and Chance up, and was acting strange, asking Mickey if we could have an extra second to “TAKE A NICE PICTURE”. I say it like that because I thought she was being a bit rude about it and I turned to her as an embarrassed daughter and went to say “mom...what is going on with you?”. But before I could do that, Chance had already gotten down on one knee. I was TOTALLY surprised and of course just started to cry, and so did just about everyone in the room, from my mom to the strangers who happened to be in the room with us. Afterwards, we were treated with a front of the line pass for a ride, engagement buttons and free wedding ears with our names and the engagement date!!! This May we will be married for 3 years and it still feels like we are in the honeymoon phase!!!"

"We spent the weekend at Geoff’s cabin in Munds Park hiking, playing with the pups, and relaxing. On our way back to Phoenix Geoff wanted to take the “long way home” through the back roads of Sedona! We’d been to this one spot in past trips at the top of this mini mountain... & then this happened! Best day of my life. 11.11.18. (& no I had absolutely no idea he was about to propose in the first half of this video!!)

"My fiancé is actually a pilot and he took me up in the air and had “will you marry me” written on the ground and proposed while flying!

We get married in November and I bought my dress through you!" 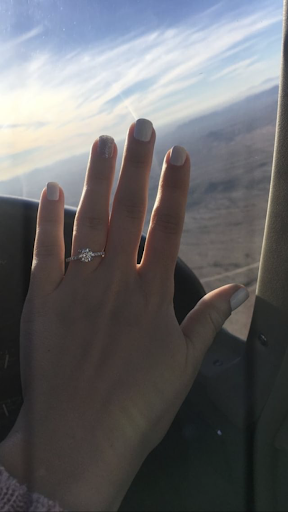 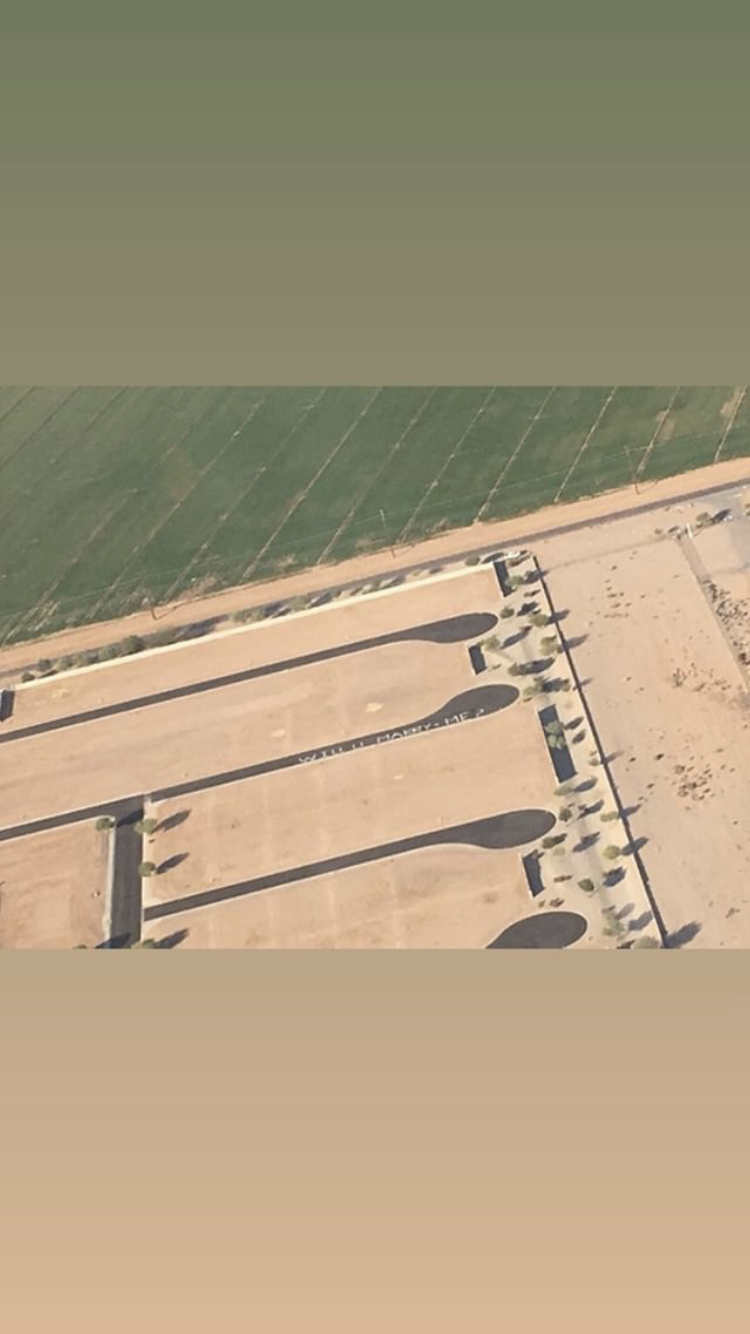 "Connor and I decided California would be a fun place to go to for a weekend getaway. We spent the morning checking into our hotel on the beach, eating at a local restaurant and shopping in Malibu. It felt like a typical day we would spend in California. That evening, Connor suggested we go watch the sunset at El Matador Beach. We laid out a blanket in the sand by the cliffs and watched as the sun went down. Then Connor asked if I wanted to go feel the water so we walked down. He hugged me and was telling me how happy I make him. When he let go of the hug but kept my hands and began telling me why he will always love me and wants to forever, I knew exactly what was about to happen. I could feel his passion the way he locked eyes with me. He continued and I started crying, hugging and kissing him overcome with happiness. He got down on one knee and asked me if I would marry him! It was the most magical moment ever. I said the most confident yes of my entire life and have every day since then, and will forever." 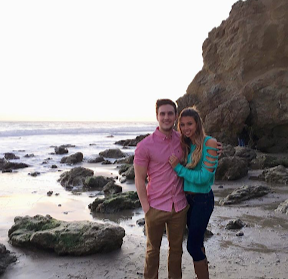 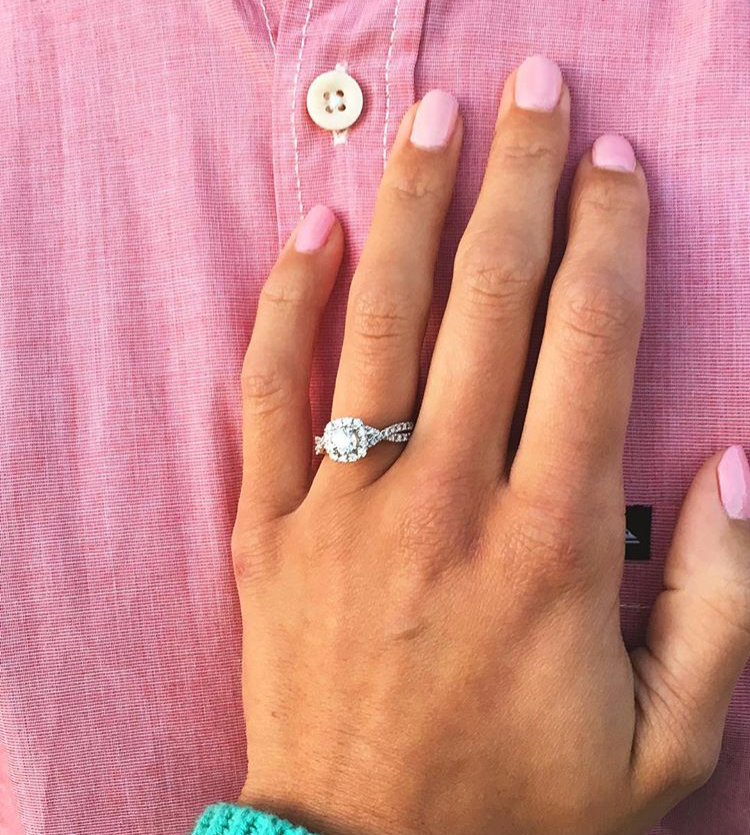 "We had just moved to Mebane NC where my dads family is. One sunday at church my dad felt the holy spirit tell him “your daughter is going to find her husband here at this church”. He told me, I kinda laughed at him and said okkkk dad! Little did I know, I sat beside Michael the next sunday at church and from there it was history. We met in January of 2017. Started dating February 7th, moved to Myrtle beach (my hometown) in March. He proposed in June. We got married July 22nd of 2017! It was one of those things where we knew it was Gods plan for us to be together and did not want to wait long before we got married. We fell in love so very quickly and still to this day I love Michael so very much and will be forever thankful for him! As for how he proposed: we had talked about in advance, he already had a ring that was in his family- which helped. I just didn’t know when he would do it. All of our family was coming into town one weekend in June, and I kinda had a feeling he would do it at dinner the night we all went. Asked my boss if I could go home early and get ready for it and she said yes. Little did I know, he had taken the day off and had the proposal planned when I walked in the door. His mom was already there and recorded it for us. He wanted to make it more intimate. And it was. He had our song playing the back ground. “In case you didn’t know” -which was our first dance song. We went to dinner later that evening and celebrated. We got married on my family's farm in Mebane NC and it was such a wonderful time. We will be celebrating 2 years this July. And will have a 1.5 month old this year!"

I'll be honest with you all, these engagement stories have me swooning and filled with joy. If these stories inspired you to share your engagement story with us, please send it to gracebridalteam@gmail.com or DM us your story on instagram @gracestyleandbridal.

COVID-19, the affects and what you can expect from us here at Grace Bridal & Honey&Shaw!